The Jewels of Quakerism was the name of a course taught for six weeks during the Summer of 2009 at the Pendle Hill Quaker Retreat Center in Wallingford, PA. That class focused on another “Jewel” each week, lifting up the Keefe-Perrys’ understanding of what makes Quakerism particular and powerful.

As  part of the the JoQ Project, each week the results of an online survey were published. The survey was new every week and was open for anyone to fill out online if they wanted to contribute their understanding to the topic for that week’s class.

After the course was taught each week, Callid and Kristina created a web video that addressed much of the content covered in that week’s class. These videos were  intended to serve as information resources to the broader world interested in Quakerism and also as a bridging medium for folks who wanted to have access to the content of the course at Pendle Hill but couldn’t be there. All videos can be downloaded, burned to DVD, and reused free of charge as long as they are not used for commercial purposes.

This site contains all of that information plus some other resources that the Keefe-Perrys have found to be useful over the years.

Kristina Keefe-Perry is a member of Rochester Monthly Meeting, New York Yearly Meeting. Within the US and Canada she travels under a minute from her Monthly and Yearly Meeting, leading retreats on prayer, Earthcare as a spiritual practice, faithful service in peace and justice, deepening vocal ministry, spiritual discipline, discernment and gifts, and theopoetics. She served on the Traveling Friends Advisory Group of NYYM, and convened a semi-programmed worship in her Monthly Meeting. She co-coordinated and co-led the Shalom Project in 2003 (with Zachary Moon) and Koinonia in 2005: week-long plunges into living in a community of faith and urban service for teens of Pacific Yearly Meeting. Kristina also coordinated the EarthQuaker Bike Trip – a bike ride of witness and service from Philadelphia to Johnstown, PA. She is a student at Boston University School of Theology, working on an MDIV and Certificate in Religious Conflict Transformation.  She wonders what a contemporary, contextual, Christian church-plant might look like in the context of the Religious Society of Friends. 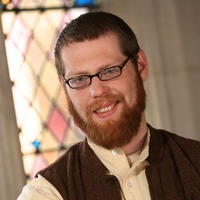 Callid Keefe-Perry worships with Beacon Hill Friends Meeting in New England Yearly Meeting though he is a member of Rochester Monthly Meeting of the Religious Society of Friends (Quakers). He travels in the Gospel Ministry within, and beyond, his denomination, often with his wife Kristina serving as Elder (and their daughter, Nahar, along for the ride). In addition to having visited many meeting and led many retreats, he has served as a member of the Traveling Friends Advisory Group of NYYM, co-led Bible Study for annual Meeting sessions, and traveled in the ministry on behalf of the Yearly Meeting during the General Secretary’s sabbatical. He has his Masters of Divinity from Colgate Rochester Crozer Divinity School and  is currently a doctoral student in Practical Theology at Boston University where his research focuses primarily on Adult Religious Education and creative practices. His work affirms and encourages elements of the aesthetic and improvisational within traditional theological discourse. Currently he serves as the President and Chairperson of the Board of the Transformative Language Arts Network. Previously Callid has taught and performed improvised comedy, been a founder and manager of Western New York’s largest comedy theater, been on the Executive Board of the League for the Advancement of New England Storytelling, and has worked as a consultant on the use of the Arts in public school classrooms. He affirms that God’s Spirit is calling us all forward into ever greater Justice. Now.